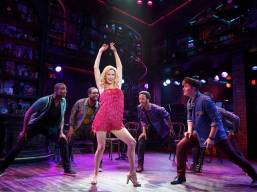 Sometimes you need to give yourself over to the music. In a spur of the moment decision I bought a ticket to see the revival of Smokey Joe’s Cafe with music by Jerry Leiber and Mike Stoller. This prolific duo wrote some of our most famous rock pop, soul, R&B, gospel and doo-wop music over the last 60 years.

This isn’t a play, it’s really a musical revue. The nine member stellar cast blow the roof off the joint?) and there wasn’t a person in the audience who wasn’t dancing in (or out) or their seat. The songs include oldies classics: ” “Kansas City,” “Poison Ivy,” “There Goes My Baby,” “Treat Her Nice,” “Hound Dog,” “Love Potion #9” and a personal favorite, “Under the Boardwalk.” Each cast member has their chance to solo and I’d be hard pressed to say if any one was better than the other. Every performance (including the ….piece orchestra) was superb.

The show is staged in an intimate theater on 42nd Street that’s been designed to reflect a well-stocked two-storied barroom. You almost wish the show would end by the cast inviting the audience up to share a drink. Instead many actors came down from the stage  to share a hug with the audience. What gets better than timeless music performed with such spirit! LAR