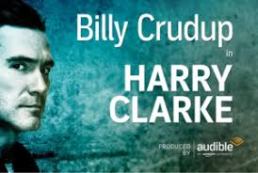 I have not seen Harry Clarke in its new incarnation at the Minetta Lane Theatre, but I did see it when it opened a few months ago at the Vineyard Theater. David Cale’s Harry Clarke and Billy Crudup’s performance are one of a kind and one for the books.

As a nerdy Midwesterner Philip (Billy Crudup) feels that he would come into his own if he only had a British accent. So he creates a British alter ego, Harry Clarke and embarks on living a double life. Harry Clarke is outgoing, funny and dangerous – everything the emotionally damaged, quiet Philip is not. This dark comedic one man play is a thriller filled with a cast of characters.

For 80 minutes you will be on the edge of your seat witnessing the pure mastery of Billy Crudup and the craziness of Harry’s tale. Any details would lessen the fun.  Harry Clarke is a play that sticks with you and, in my opinion, is one of the best plays and performances I’ve seen in a long time. It is not to be missed. LAR

Discounts: none available at this time, but keep your eye on seat filler organizations