The best theater is thought-provoking. Sure, there are escapist musicals which we all need (now more than ever). But walking out of a theater, whether you’ve been laughing or crying, humming tunes or remembering a particular phrase, the show and performances stick with you, challenge you and leave a lasting impression — that is more than worth the (rising) cost of admission.

So although they’re quite different shows, both the revival of Falsettos and Sweat are best viewed through this post-election landscape. Both take place in the not-so-distant past and while the extended New York Jewish family of Falsettos and the down-on-their luck denizens of the dying factory town of Sweat may not seem to have much in common, both shows speak to people at the precipice — confronting death, dealing with divorce, adjusting to life after jail, facing unemployment —  in short facing an uncertain future.

I found the acting and songs in Falsettos lovely and the story is an important one — it takes place just as the AIDS crisis is about to unfold. However I was left cold by some of the action – a piece where some of the actors march around in day-glo costumes was perplexing and I felt like the lesbian neighbors were an afterthought.  The show does have a good heart though and tells a story about what makes a family and forgiveness. 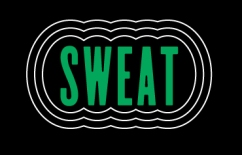 Families and forgiveness are part of the themes of Sweat, which takes place in a depressed factory town in Pennsylvania in 2000. The play tells the tale of people in varying degrees of being down on their luck. Sweat opens after two young men are released from prison and is told in a flashback, and then comes back to the characters’ in their present day lives. The ensemble is uniformly excellent, including  the drunken barfly, the woman striving to better herself, the young man trying to get out of a dead-end job. None of the characters are caricatures and although the play did become a little heavy-handed the ending packs a powerful punch as it veers in an unexpected direction. You can see how the people living in this town would vote to make America great again. AFW

Running Time: 2 hours and 10 minutes, plus a 15 minute intermission

One thought on “Theater Post-Election”