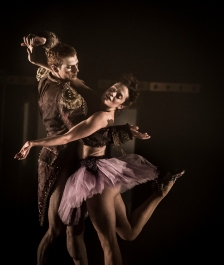 A mysterious fog surrounds the stage and auditorium as you enter the Minetta Lane Theater for Company XIV’s production of  Nutcracker Rouge. As the lights begin to dim we see Marie-Clare (a lovely Laura Careless) glide through the audience, making her way onstage, inviting us into her dream-like world. Marie Clare is half Marie-Antoinette, half Clara. What follows, in this modern day burlesque retelling of “The Nutcracker”, is a nonstop energetic performance with singing, dancing, and (even) flying above the stage. We are always eager to find out what’s next, and this eagerness lingers until the very end.

Nutcracker Rouge relies heavily on visual and aural spectacles, rather than dialogue. However, the little dialogue that is present holds an important role as touchstones to plot. Most of this dialogue is given to Madame Drosselmeyer (the captivating Shelly Watson), also the show’s M.C. Madame Drosselmeyer guides Marie Clare’s self-exploration of physical and mental desires, embodied by erotic and artful choreography. Presented through the lens of a Baroque time period, this performance is more of a sexual escapade than a refined ballet. The choreography is simultaneously raunchy and provocative and sophisticated and stunning. However, at all times it is awe-inspiringly original. One stand out moment is the aerial acrobatic number performed by Marcy Richardson. As if pole dancing upside down wasn’t enough of a challenge, at the same time she sings an operatic cover of Sia’s “Chandelier” with extreme power and control.

The energy and dedication put into this production makes it hard to believe  it is performed every night. The costumes and set add other elements of wonder. The set has many changes throughout, ranging from a mystical forest scene to a glittery land of sweets. The costumes, or sometimes lack of costumes, complement the provocative nature of the choreography. The performances are physically impressive. It is also worth noting the chemistry among the performers. The energy is palpable among each artist on stage, and makes the audience almost jealous we cannot be on stage with them. Nutcracker Rouge puts a fun, sexy, and beautiful twist on a classic holiday tale. This production shouldn’t be missed by anyone wishing to be on the naughty list. JHG