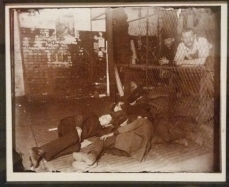 More that 100 years before Brandon Stanton created his blog “Humans of New York” there was  Jacob Riis. Photojournalism didn’t exist, yet Riis felt compelled to tell the story of real New Yorkers — the nearly 75% of its inhabitants who lived in tenements in the late 1800s to early 1900’s.. He took to the streets to interview people before capturing their images and documented the slums in his photographs. Some of these images are on display, along with his journals and printed material on loan from the Library of Congress. The images are a stark reminder of how the “haves” then were able to turn a blind eye.

Gilded New York, an exhibit of items used by the “one-percenters” of an earlier era stands in

direct contrast to Jacob Riis’ photographs. As the poor were wearing rags and sleeping on the floor, the other half wore silk and jewels. Not only did they turn a blind eye to the squalor that was downtown, they refused to act. These robber barons were not like today’s billionaire philanthropist, Bill Gates. A guard told me the only items that John D. Rockefeller donated were his brush and mirror.I left this gallery feeling depressed. 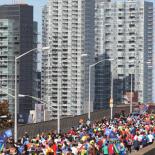 Luckily another exhibit celebrates the New York City Marathon. I felt the same exhilaration looking at this exhibit  that I feel when I watch the race from the street. The Marathon is just one of the events that brings out the best of New York and the people who live here. Happily, I left the museum on an upbeat note. This is a small museum and while I don’t think it’s worth the $14 (strongly) suggested admission it is a pleasant way to spend some time. LAR

Museum of the City of New York – 1220 Fifth Avenue