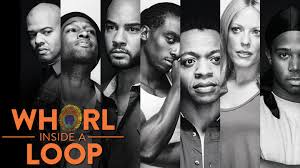 A white woman of some privilege begins to volunteer at a men’s maximum security prison. She’s an actress and leads the six inmates in a class where they learn to dramatize their stories.  Just to get into prison brings nervousness and misunderstandings – the Volunteer (as she is known) can’t wear an underwire bra, can’t touch the inmates and can’t carry anything out of the prison. As she’s fingerprinted we learn that she has a pattern in her fingerprint that is distinct – the whorl – and it serves as a metaphor for the lives of the inmates which unfold before us.

The cast of actors is excellent and never strike a false note. There is bravado, hesitancy, regret and heartbreak in their tales. The bare bone set, with the prisoners and Volunteer sitting or moving among folding chairs while being watched by a guard, adds to the effectiveness of the writing. The six actors who play the inmates also play, in a less effective plot, the friends of the Volunteer, who urge her as they hear the inmates’ stories to write them down and develop a play around their stories. Sherie Renee Scott, who plays the Volunteer, actually drew upon stories from actual prisoners to create this play (is your mind whirling now?).

Whorl Inside a Loop doesn’t leave us with any conclusions. The Volunteer gets to leave the prison, the inmates have to stay. We’re left to ponder whether the punishments fit the crimes and what issue race played (and plays) in the sentences these men received. This is a timely play and one that sparks discussion and stays with you. AFW