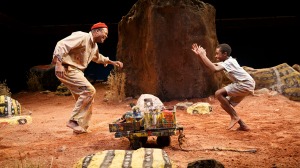 Athol Fugard’s Painted Rocks at Revolver Creek is based on the life of Nukain Mabusa, who suffered the indignities of being a black man living in South Africa during apartheid. He found work on a farmstead owned by Afrikaaners, Elmarie and her husband, but Nukain never owned land or a home. Instead he painted stones, boulders actually, creating a garden on a hill owned by someone else.

The two-act play begins in 1981 when Nukain and his grandson, Bokkie, set off to paint what Nukain says will be his last rock – his 106th according to his grandson. This is the “big one” and on it he paints his life story. When Elmarie sees it she demands it be removed. Nukain acquiesces, but his grandson is devastated. Bokkie eventually returns to the farm to try to restore the painting. Now it’s 2003 and he’s educated, independent and a principal at a local high school and goes by the name of Jonathan.  Elmarie is now living in fear because neighbors were murdered by blacks trying to re-appropriate the land.

Fugard may not have lived in South Africa for many years, but he knows his country – all its beauty and its ugliness – and with Painted Rocks at Revolver Creek he has written a play that is as great a work of art as Nukain’s rocks.  In addition, every actor in this play deserves mention: Caleb McLaughlin as the aged and ailing Nukain and his grandson played by 13 year-old Leon Addison Brown, Bianca Amato as the young and old Elmarie and Jonathan played by a superb Sahr Ngaujah. They were so good that I was transported in time and place and lived every one of their emotions – yes, I cried giant tears through most of the second act.  And I think this is the only play I’ve seen where the audience broke into spontaneous applause when the stagehands completed the set change during the 15 minute intermission! LAR