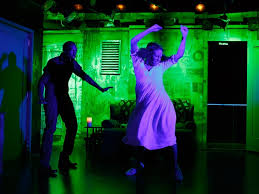 On a frigid night I ventured to the subterranean black box theater at the Roundabout Underground and found myself in Miami. Not literally, of course, but at Jeff Augustin’s Little Children Dream of God – a play about a pregnant refugee washing ashore in Miami which had the color, music and warmth of the real thing.

Sula, a Haitian immigrant, who is  “eleven months pregnant” escapes Haiti and her personal demons for a new life in America. She seeks out Joel, a landlord, who she’s heard helps new immigrants and others who are down on their luck. In his building she meets an assortment of kind-hearted, oddballs. What they don’t know is that Sula’s dark past includes practicing voodoo. When her newborn never cries Sula thinks something is wrong and that God is punishing her. (I just kept thinking how lucky she was!)

Little Children Dream of God, although entertaining, is overly ambitious. There are too many characters and unnecessary subplots which detract from the main story. But the lighting designer, Gina Scherr and the excellent Deirdre O’Connell salvaged the play for me. Ms. Scherr bathed the theater in colors that conveyed the warmth of the Florida sun and conversely sent chills down my spine during a climactic scene where Sula battles demons for her son’s soul. Ms. O’Connell plays one of the tenants with a heart so big that she had enough love for her eleven children, her God (who she said fathered them), her patients, Sula and the rest. So although it’s Sula who gives birth in Mr. Augustin’s play, it’s Ms. Scherr and Ms. O’Connell who give it life. LAR

Discounts: Currently none available, although I have seen tickets on papering company sites