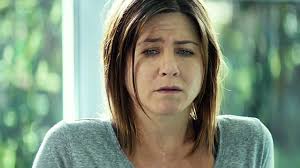 I find Jennifer Aniston to be a good comedienne. But if Cake is supposed to be her breakout performance in a serious drama, she fails miserably. This is a one-dimensional film that does not succeed in engaging its audience. In fact, at only 102 minutes it still dragged.

Aniston’s character Claire Bennett was in an accident – it takes nearly half the movie to find out what happened – and is left scarred physically and emotionally. She’s a bitter pill-popping junkie and alienates everyone around her. As a member of a support group for chronic pain sufferers, she becomes obsessed with another member’s suicide. She stalks this woman’s husband and imagines having conversations with the woman’s ghost as she plots her own demise. When you find yourself hoping her character would kill herself to put us all out of our misery, you know the movie doesn’t work.

Aniston never succeeds in gaining an emotional connection with the audience. The person who deserves recognition for her performance is Adriana Barraza who plays Silvana, Claire’s housekeeper. At times enabling, at other critical, her nuanced performance is the only interesting layer of Cake. In my opinion, Aniston should stick to the script and keep us laughing. LAR

One thought on “Cake – underbaked and bland”