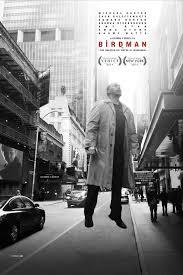 Often when there’s a great deal of hype surrounding a movie I see it and walk away disappointed. That definitely was not the case with Birdman, the latest film is by director Alejandro González Iñárritu, whose previous films include Babel and Amores Perros. This movie is sweeping and lyrical and equal parts reality and fantasy.

Birdman is Michael Keaton’s movie all the way. Those of us who’ve asked why we haven’t seen more of this actor are left with newfound respect for his talent. He’s surrounded by other talents – Edward Norton, Emma Stone and a great Zach Galifianakis to name a few – in roles both showy and quiet. The movie examines Keaton’s character’s relationship to the other people in his personal and professional life and the relationship to the voice inside his head – that of “Birdman.” The film is a roller coaster of a never-ending scene – the camera takes you through hallways, into the tumult of Times Square and onto both physical and mental ledges. People with a knowledge of pop culture will love the inside references – especially about today’s movie stars performing on Broadway. I’m not sure if I buy the New York Times critic storyline, but that was the only weak strand to me.

Birdman asks questions about what happens when someone has early success and walks away for the sake of his art. In the land of never-ending sequels and “blockbuster” movies, this is a question that should be asked by some of today’s studio heads and actors. We as audiences would be better served by more art and less commerce. AFW