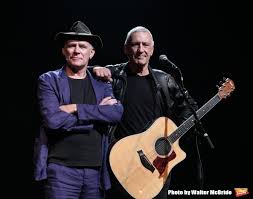 Lennon: Through a Glass Onion opens and closes with gun shots – we know how the story ends.  The stage is somberly lit and there’s a smoky feel to it. John R. Waters, the star and playwright, is a 65 year old man who looks more like Sting than Lennon. But once he opens his mouth he sounds convincingly like the man with the Liverpudlian accent. He doesn’t aim to impersonate John Lennon. Rather, he channels him.

Mr. Waters has been performing this tribute to John Lennon for 22 years. Accompanied on piano by singer/pianist Stewart D’Arrietta they perform 31 songs (or pieces of songs) that are connected together through Mr. Waters’ monologue. The play is neither biopic, nor chronological. It’s almost a stream of consciousness that covers Lennon’s life from his meeting Paul McCartney as a youth in Liverpool, to the trips to India, to his life with Yoko Ono and his time as a father.

The entire performance feels more cabaret than theater. You learn nothing new about John Lennon, but if you’re familiar with his songs this can be an entertaining (but slow) way to spend an evening. LAR