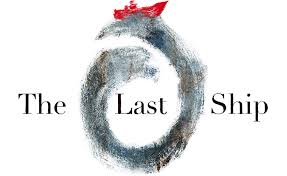 You can never go home again and nothing ever stays the same. The Last Ship is built around these adages. Sting wrote the music and lyrics. So the music is good, but like much of Sting’s music, many of the songs sound the same.

Gideon, a 15 year old boy, refuses to follow in his father’s footsteps of working in the shipyard. He dreams of traveling the world and leaves his girlfriend and the town behind. Fifteen years later he returns to big changes. His father has died, a salvage company has bought the shipyard,the townspeople are unemployed and his old girlfriend is engaged to another man. And he also learns that he has a 15 year old son. A local priest encourages the unemployed shipbuilders not to lose hope. He asks them to pull together, break into the shipyard (and into song) and build one final vessel.  They could sail this ship to port towns where others were also losing their jobs. What this hoped to accomplish, beyond the symbolic gesture, is beyond me.

A big problem with the play is that Gideon is not a nice guy and it’s hard to care about him (hmm….the character is supposedly based on Sting himself). And you’d think Gideon’s son Tom, would have dreams as big as his dad. Nope, in fact he’s boring – but he harmonizes beautifully. Yet in spite of this play’s shortcomings, when the ship sets sail you do feel a tug at your heart, but the tug isn’t strong enough to carry This Last Ship.  LAR