We live in New York City on the Upper East Side in Yorkville. Yorkville, a neighborhood above 86th street on the Eastside still feels like a real neighborhood. This makes it a lovely place to live, but not so much a magnet for new, cutting edge restaurants, bars or clubs. We can always head downtown if we feel like going to trendy spots, but when we head back uptown we want a place that feels like home.

Don’t get me wrong – there are plenty of pubs, wine bars, bars with specialty cocktails in Yorkville, but there aren’t many upscale restaurants that cater to a more professional crowd. Lucky for us the Michael and Susy Glick own two restaurants that fit the bill and are close to where we live– Parlor Steakhouse and The Writing Room. They have become our surrogate ‘Cheers.’

We discovered the Parlor a few years ago. Parlor is primarily a steakhouse with a petit filet always done to perfection (so I’ve been told), but there’s plenty on the menu to suit my mostly vegetarian/pescatarian diet. We tend to eat late and like to eat at the bar. The staff are attentive and as we’ve “held court” from bar stools, we’ve met a number of friendly people — some even from other neighborhoods in the city. Parlor has become our go-to place when we’re tired and want to stay local – we just walk across the street.

The Glicks must have known that they were onto something with the Parlor. 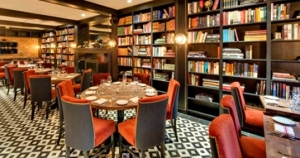 They took over the nearby space that was formerly the famous (or infamous) Elaine’s. In January The Writing Room opened having undergone an extensive renovation. Now the space feels fresh and welcoming rather than dark and ominous– the feeling you’d get walking into the Elaine’s. The back room has been turned into a dining “library” with a clubby feel and an eclectic mix of books that we’ve been told is representative of Elaine’s past patrons. The Glicks were careful to try not to offend Elaine’s fans and have instead tried to pay homage to the lady herself. The food is good, but the menu isn’t as varied as that of the Parlor. It’s a bit harder for me to satisfy my picky taste buds. But that’s ok. The martinis served up by the bartender make up for the lack of vegetables on the menu!

We ate at The Writing Room, not too long after it opened, on a Monday night. The crowd was mixed ages and the atmosphere was friendly. We ended up eating and drinking until closing. We went back a couple of weeks later on a busy Friday night and were greeted by name. “Sometimes you just want to go where everybody knows you name”*….who could ask for anything better after a long week? LAR

*”Where Everybody Knows Your Name” Gary Portnoy and Judy Hart Angelo